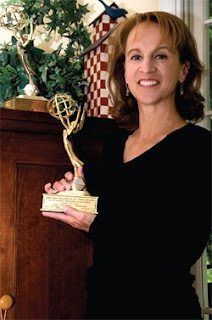 When it comes time to make that incredibly challenging decision to be a stay-at-home-mom or follow your career, two time Emmy Award winning TV producer Janet Shalestik didn't hesitate.

"It wasn't a choice," she says. "I simply knew that my kids were the most important people in the world to me. That made giving up the glamour and the world of TV a lot easier."

For years, she spent her days attending with great joy to the needs of her kids and husband. And nearly two decades later, the mom of Alison (17) and Sam (14) says motherhood is still her most important achievement. But now that the kids are a teens, Janet has embarked on a new career working as a representative for an international health and wellness company that helps people with physical, environmental and financial wellness.

"After many years of being a stay at home mom, I looked for a job that was flexible," she explains. "Even though they don't admit it, my teenagers still need their mom at home as much as younger children. That's how I define modern motherhood. Having a flexible job that allows you the time to be with your kids, attend their events, volunteer at their schools, and having the knowledge that you’re making a difference in their lives — all the while knowing you love your job and are getting paid to help people live healthier lives."

Janet says her life is different than her own mom, who is "87 years young, and the closest thing to an angel on this Earth. I’m not that angelic," she admits, noting that the traits she admires in other moms include compassion, intelligence and a sense of humor. "I detest closed-mindedness and people who say they’re going to do something, and then don’t."

Her biggest challenge these days is getting all the things done that I need to do, and not beating myself up for falling short much of the time. That's a far cry from her life a few decades ago.

"When I was in my 20s, I thought my greatest accomplishment was winning two Emmy Awards as a producer for 'Capital Edition' on WUSA-TV, Channel 9, and getting nominated for a national Emmy for an 'America’s Most Wanted' story against producers for Nightline, 60 Minutes and 20/20. In fact, when my son Sam was little, he used to think they were my basketball trophies! I’m 5’2” so I thought that was pretty funny. And as nice as those statues look in my family room, they can’t give me hugs, so they greatly pale in comparison to raising Alison and Sam, and seeing them grow up to be incredible human beings."

Janet admits she has faced some tough times recently.

"My husband and I are separated after 21 years of marriage, and that’s been tough on all of us," she shares. "My goal now is to show my children that if life sometimes throws you curve balls. But if your life doesn’t turn out like you once planned – you can pick yourself up, and make the best of it. I want my kids to know the importance of being resilient, because they'll be stronger for it. My goal is to stay open-minded and always live life with a glass half-full attitude."
Posted by Hope Katz Gibbs at 2:09 PM

Labels: On the importance of being resilient