Mark your calendar for Thursday, Aug. 21, 2008 when the life of Bobby de Lorenzi will be celebrated in grand karaoke style. The event is a fundraiser for the beloved brother of Success in the City founder Cynthia de Lorenzi, who has started a foundation in Bobby’s name.

“When Bobby died suddenly in 2002 it was completely devastating to the entire family and all of the people who worked for him at his company, Patriot.Net,” explains Cynthia today. “Bobby was one of those people who lit up a room the second he walked into it—who changed people just because he knew them. This foundation is our way of honoring his life and bringing joy to the people who never got to meet him.”

The goal is to annually provide $1000 or more to a needy woman or man to help them go back to school, manage their lives after leaving a relationship, or buy the wardrobe they need to land a great job, Cynthia explains. That mission also dovetails with the goals of her organization, Success in the City, a support network for women entrepreneurs.

“We know that with a little humor and love from your sister-friends, anything is possible,” Cynthia shares. “The grants given by the Bobby de Lorenzi Foundation will provide some money to make transitions into the workforce easier, as well."

And since singing at the top of his lungs was something Bobby prided himself on, the Thursday, Aug. 21 fundraiser is entitled: Chari-oke (Karaoke for charity). We invite you to support this good cause. (Details follow.)

DETAILS:"Chari-oke" will feature food, fun, special entertainers as well as folks like you. It's an opportunity to show your musical or comic talent at the open mic or karaoke machine. Enjoy whoops and hollers and maybe even a valuable door prize, like concert tickets!

SIGN UP:Fees are $45 for Success In The City members; $55 for non-members. This is a co-ed event. Find information and registration link on the Events page at www.SuccessInTheCity.org or call Sheri Fulton at 703-309-5502.
Posted by Hope Katz Gibbs at 6:42 AM No comments: 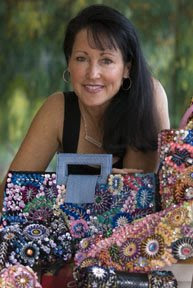 Beautiful beads from Tokyo—more than 30,000 of them—grace the most elaborate offering by Laura Lee Designs, an international handbag firm founded in 2005 by California native Laura Lee Williams. Other designs—such as her trademark M bag—feature fewer beads, but the focus here is on the three-inch wrap of Australian snakeskin in the middle. “The white version is perfect for weddings, and pink version is a personal favorite because we contribute a portion of the proceeds from each purchase to Breast Cancer Research,” says the soft-spoken brunette, who shares the tale of how she got started in the handbag business as she sips chamomile tea at a café not far from her current base of operations in Tyson’s Corner, VA.

Although her father and siblings all work in the TV and movie industry, Laura Lee didn't opt for a career in Hollywood but graduated with a degree in economics from UCLA, and later got a master’s degree in international studies from Harvard University. She spent most of her career working on strategic initiatives and marketing programs for Fortune 500 firms such as Nike, American Express, and Apple Computer. But when she accepted a job as VP of global business with Hong Kong’s Pacific Century CyberWorks (PCCW) in 1999, her time spent in China inspired her to look at the world in a new way.

“I helped PCCW transform itself from an old guard telecom company into a cutting-edge high-tech organization that provides Wi-Fi in airports, developed call centers and established broadband services,” she explains. “In doing so, I worked closely with Chinese executives and watched as they planned strategies that took a long-term view of business. It was a very different approach from what I experienced earlier in my career when I worked for U.S. executives. Too often, we Americans focus only on short-term profits and as a result, some very good ideas never got the chance to take root.”

In early 2003, Laura Lee decided to meld the best of both cultures into a company of her own. Her mission: To manufacture elegant hand-beaded handbags and sell them to a sophisticated clientele in the U.S. and abroad. Her timing was good. The total value of imports of women's handbags or purses had recently hit $1 billion, according to the Gale Encyclopedia of American Industries. And Laura Lee’s bags, which range from $250 to $700, started snapping up a nice portion of it from retail shops in Spain, Australia and the U.K. In the U.S. they can be found at Bloomingdale’s, Fred Segal, the Ritz-Carlton gift shops, and tony boutiques from Los Angeles to Miami.

Her bags hit prime time when one was featured on a 2006 episode of Desperate Housewives. Actress Eva Longoria’s character Gabrielle Solis carried a Laura Lee handbag—and the show’s costume designers made an outfit to match. Organizers of the March 2007 Oscar Wilde pre-Oscar party saw the episode and called Laura Lee to order six of her purses to auction off to celebrities, and invited Williams to the gala.

“Being at the Oscars was amazing,” admits Laura Lee. “My bags are popular with women who pride themselves on being fashionable, original, and standing out in a crowd. I like that in a woman, and want to encourage more ladies to make a statement and be recognized.”