Sharon Rockefeller on the importance of public broadcasting 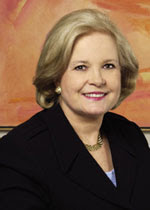 The question came at the end of Sharon Rockefeller’s luncheon speech at the National Press Club on June 5: What is your response to critics who say that public broadcasting is too liberal? Rockefeller paused, looked out into the audience, and with a hint of a smile said: “No, it isn’t.”

With similar poise and style, the CEO of Washington’s flagship public TV and radio stations WETA spoke for 30 minutes about the role of public media on our democracy.

A champion for public broadcasting Rockefeller told the audience of 150 reporters, business leaders, and politicians gathered in the grand Press Club’s ballroom: “From the founding days of this nation, the U.S. has recognized that along with the right of the people to shape their own government comes the responsibility to have an informed, involved citizenry. In today’s era of global access, we are increasingly more aware of world events. Nonetheless, our society is becoming more polarized. Public broadcasting can and does counteract that trend. The concept of civil discourse is not a quaint ideal, but a very necessary tool for bonding a country together.”

Her personal discovery of public broadcasting came in the 1970s when her husband [Senator John D. “Jay” Rockefeller IV of West Virginia] was president of West Virginia Wesleyan College, and she was a young mother raising three children under the age of 5. She listened to All Things Considered while carpooling and Sesame Street while preparing meals. “Then standing in my kitchen one day, I had an epiphany,” she shared. “All this great programming came from a related source: Public radio and TV. It was at that moment I became a true believer in the power of those mediums to inform, educate, and inspire.”

Although being a good political wife was important to her, she knew her life’s work would be to advance public broadcasting. Soon after, Rockefeller began a 12-year term on the board of directors for the Corporation for Public Broadcasting, including four-years as chairman. She has led WETA since 1989.

Her life has been fortunate, indeed. But not as free-spirited as she might have liked. She mentioned during her speech that then political wannabe Jay Rockefeller proposed with a particular wedding date in mind: April 1, 1967. "When I asked him why he said it was after the election, of course," she explained, adding with a wry tone: "and note, too, that our kids were born in off-election years, as well: 1969, 1971, 1973, and 1979."

In fact, the graduate of Stanford University has truly struggled personally. Her twin sister Valerie Percy was murdered in the family's home in 1966, during the time their father was campaigning for the Senate. The case remains unsolved. And in July 2005 Sharon was diagnosed with colorectal cancer. She is currently in remission.

Still, Rockefeller remains grateful for her life and her experiences. “Relatively few of us have the good fortune to devote our professional lives to the causes we hold most dear,” she believes. “I have been truly fortunate.”
Posted by Hope Katz Gibbs at 12:08 PM No comments:

Labels: The role of public media on our democracy 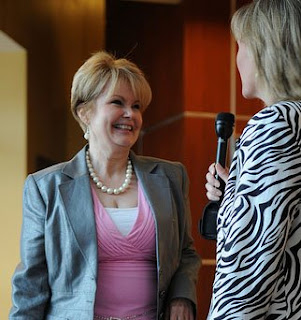 Nearly 200 women clad in their diva best packed the AMC Theater in Tyson’s Corner VA on Friday, May 30 for the first public showing of Sex in the City, the best chick flick of the summer that is based on the popular HBO series.

“Not a single seat was available,” says Cynthia de Lorenzi (pictured right, being interviewed Jennifer Cortner, by president of EFX Media in Arlington) “and it was only 8 a.m. on a week day.” That’s just what Cynthia hoped for when she planned the event, the biggest yet for her 2-year-old Washington DC-based networking group Success in the City. “It was fabulous,” Cynthia said after the show, referring not only to the romantic comedy on the screen but to the hundreds of executive women who dressed up and headed to the theater instead of the office.

“I wouldn’t have missed this,” says Darcie Davis, Senior VP of Zephyr Strategy, Inc. and member of the Success in the City Board. The big event included a mid-morning spree at nearby Saks Fifth Avenue for a Saks in the City after-party where all sipped complimentary cosmopolitans, chatted with old and new girlfriends, and were treated to 15% coupons off nearly everything in the store. “Fun in big doses with other business women is what Success in the City is meant to be.”

Mixing friendship and business is the goal for Cynthia a fashionable Texas-born dame who is proud to conduct deal in heels. And when her beloved brother Bob unexpectedly died in 2002, she did the only thing she could. “My husband sold his business, packed up our house, and moved to Washington, DC to support my take over as CEO of Bob’s telecommunications company, Patriot Net [www.patriot.net]. “There was no other choice,” Cynthia says, admitting she suffered from tremendous culture shock. “Washington is not Texas. You may think we’re tough, but there is an impenetrable old boy’s network here. I found they were suspicious if you tried to talk to strangers in the elevator. And the women definitely didn’t wear pink. But they do now.”

Cynthia said hooey to the idea that she couldn’t beat ‘em. She founded Success in the City, a networking group for C-level businesswomen. “Quite simply, I needed girlfriends,” Cynthia confides. “In addition to dealing with some management team conflicts due to the fact that I was a Southern woman serving as CEO , and living in this new town, shortly after I arrived here I was diagnosed with a life threatening tumor. I had to find a support system — and fast.” Fortunately, she met a few women who were connected and approachable, and within a few months her pretty-in-pink networking idea created a buzz that led to a groundswell. The women who joined early on got their friends to participate. They liked it so much that the second tier told their friends, and they joined, too.

CEO Chick Chats, Breakfast at Tiffany’s for members, conventions at getaways like Virginia Beach and group trips to New York City followed, and then came the Big Event movie extravaganza in May. This summer, she’s launching a Success in the City TV network, and by the end of the year hopes to franchise the concept in other cities, beginning with Richmond, Baltimore, Philadelphia and New York. And the best part, Cynthia says, I found the mother lode of friends who are smart, successful women to befriend. “Isn’t that what the good life is all about?” she beams.