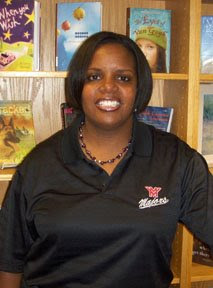 Praised for her ability to motivate students, she set several goals when she became principal. The first was to have Mount Vernon become a positive focal point in the community. She also wanted to reach out to Hispanic parents who were underrepresented at the school.

And King was determined to improve instruction — and find a way to forge relationships among students and staff members. So she met with community members and parents and challenged them to become ambassadors for the school. Then she reached out to Hispanic parents, with the help of a neighborhood church, and ultimately established Hispanic Parent Council.

She also adjusted the bell schedule to facilitate student enrichment, mediation, and mentoring — and carved out a special 30-minute class period during which all students and teachers read silently. Students can also use part of the period to consult teachers for extra help, make up tests, or complete assignments.

Where no educator has gone before?

Then last year she did what few other educators might be willing to do: She promised to cut her hair into a Mohawk if students raised their SOL scores to 80% or higher in each of the four core areas. Not only did they accomplish that, but 28 students in the class of 2007 earned the International Baccalaureate (IB) diploma—the highest number in the school’s history.

Last November 20, King headed to the hairdresser to make good on her promise.

“I have a passion for finding ways to address and close the achievement gap between white and minority students,” says King, who grew up in Mount Holly, NJ. “My mom is from Ethiopia and my father is American, so I had a taste of what it meant to merge two cultures when I was a child.”

She deepened that understanding after graduating from Virginia University where she got a degree in Business Information Systems in 1986. Her husband — as a second lieutenant in the US Army — whisked her off to Germany soon after the wedding. King wanted to get her teaching degree, but worked as a substitute teacher and a bank teller instead.

In 1990, the couple moved again to Lawton, Oklahoma. “My dream to teach was still there but I had a baby and no time to go back to school,” she explains. “I was hired by the school system to be an instructional assistant, but the position ended after a year and I was transferred to a library assistant position in another school. I enjoyed that position, too, but soon after was transferred to a local high schools to become the finance secretary.”

In 1995, when her husband was transferred back to the Washington, DC area, King wasn't going to let anything keep her from finding work in the classroom. First, she found a job as the secretary to an elementary school principal. Six months later she was hired at Mount Vernon to be the school's finance officer.

“As luck would have it, the principal told me about a program at George Washington University which allowed me to get my Master's in Special Education,” she shares. “I entered the program and left my finance position to take an Instructional Assistant in the Special Education Department at Mount Vernon. After a year of school, I was eligible to teach on a provisional license and was hired to teach at Mount Vernon, where I taught math to the special education students for the next four years.”

King worked her way up the system, eventually becoming a sub-school Principal at Mount Vernon. In the summer of 2006, she landed her dream job. The awards that have come since — and there are several of them — are wonderful, King says, but what is most important to her is helping at-risk kids.

“Four adult volunteers, and myself are currently working with a group of students in a program we call the 30/30 club,” she explains. “Prior to entering the program, these students were all low performing and unmotivated, but we have been successful in getting the majority of them to turn around their grades, behavior and attendance ion school. I strongly believe that building relationships with at risk students in key to the success of the program.”

King is determined to continue to be a positive role model in the years to come. She is currently studying for her PhD in Education Leadership and Policy at Virginia Tech, and hopes to one day become Assistant Superintendent — and then Superintendent — of a large school district.

“I know that if I am truly running the show, I can make a difference on hundreds of thousands of children’s lives,” she says.

We’ll let you know when King lands that job.

To learn more about the work Nardos King is doing at her high school, visit http://www.fcps.edu/MtVernonHS.
Posted by Hope Katz Gibbs at 7:34 AM