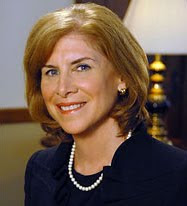 When asked if she’d welcome embedded reporters at disaster sites, the Red Cross president said she’d be happy to have them. “I actually think our disaster sites would make a great Reality TV show.” Stay tuned for that.
Posted by Hope Katz Gibbs at 1:00 PM No comments: