Suzanne Carbone Gives Thanks, Advocates for a Cure to Alzheimer's Disease 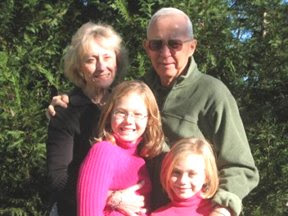 In support of Alzheimer's Disease Awareness Month (November) and in celebration of what it truly means to give thanks for your loved ones this Thanksgiving Day — we honor Suzanne Carbone, a caregiver and advocate for research into the prevention and cure of Alzheimer's disease. Last May 14 she testified before the U.S. Senate’s Special Committee on Aging on behalf of Bob Carbone, her husband of nearly 40 years who was diagnosed with Alzheimer’s in 2000.

Suzanne (pictured above with her husband Bob and their grandchildren Tessa and Sophie Sontheimer) told the Committee: “In many ways, his story is a classic American success story. He was born in Plentywood, Montana, where his immigrant father was a section foreman for the Great Northern Railroad and his mother was a homemaker. Relying on his sharp mind and love of learning, Bob earned a Masters degree from Emory University and PhD from the University of Chicago. He was the Special Assistant to President Fred Harrington at the University of Wisconsin, and before his diagnosis, was the Dean of the College of Education at the University of Maryland. Always interested in the political process, he ran for the Maryland State Legislature in 1982.”

“In January 2007 my husband moved into assisted living, when caring for him at home was no longer an option. I am just one of millions of caregivers who are faced with such a difficult decision. Every day, I meet another caregiver who needs help and doesn't know where to turn. Our country is not prepared for the emotional, physical, and financial impact of this disease.”

A LOVE STORY Suzanne admits her decision to move Bob into assisted living was one of the most difficult decisions she has ever made. She recalls the day, in the late 1960s, when she was studying to be a librarian at the University of Wisconsin and literally bumped into her future husband.

“It was pouring outside and we both happened to dash into the dry cleaners to get out of the rain and I bumped right into him,” she says. “I apologized and ran out, but he asked the owners what my name was. They gave him my number, and he called me every day until I agreed to go out on a date with him.”

The couple married in 1968. “It was a very memorable year, but also a time of great turmoil in the country. Bobby Kennedy was shot, and the Vietnam War was finally at an end. I feel that I was a product of that war. I had been dating a fighter pilot when I bumped in Bob, but I think our marriage was meant to be.”

In 1972, Suzanne and Bob moved to Washington, DC so he could take the deanship at the University of Maryland. Their first child, Angela, was born in December of 1968, and their son, Chris, in 1972.

THE ODYSSEY It was in the late 1990s that Bob started exhibiting signs of Alzheimer’s — although no one could pinpoint what the symptoms meant early on. “He had always been marvelous at giving speeches and never failed to tell the perfect joke. But one day he forgot the punch line. Other times he had difficulty finding the right words. Eventually, he couldn’t remember a neighbor’s name, and sometimes would pay the same bill twice.”

It was a dramatic contrast to the gregarious husband she’d loved for all those years, Suzanne explains. “When he ran the education department at the University of Maryland, he could recite the resume of everyone on his faculty. He was fun loving, and adored his children. He even ran for the state legislature in 1982. Bob was always an exciting person to be with. But these new lapses confused and frustrated Bob, and sometimes he’d lash out in anger.”

Initially, Suzanne says she thought there was something wrong in her marriage. “He’d get so mad at me, but eventually I realized that he was really frustrated with himself and couldn’t figure out what was happening.”

Thanks to the insight, advice and support her children provided, Suzanne began to suspect her husband was suffering from Alzheimer’s disease. So when the diagnosis finally came, she admits it was a relief for everyone. “One of the first things that Bob did was to tell all his friends and colleagues that he had it,” she says. “I think he was grateful to at last give the problem a name.”

Bob resigned his position as an educator and filled his days delivering food to the needy for Meals On Wheels. Within a few years, however, that also proved to be too difficult. “He had trouble finding the places to deliver the food, but it made it easier to tell people that what was happening was a problem going on inside his brain,” Suzanne notes, and says soon after she began looking for the best assisted living home she could find to care for her husband.

Today, Suzanne visits Bob almost daily and although he now remembers little about their life together, in her heart Suzanne knows that he still knows how special she was to him. “He may not be able to say my name, but he smiles when he sees me. I sit down next to him on the sofa and especially after I’ve had a hard day, he’ll put his arm around me. Even though the details may have faded, I believe our love still lives on.”

LESSONS LEARNED In addition to working as a librarian in Maryland, Suzanne provides regular support for anyone who suspects a loved one is suffering through the beginning phases of Alzheimer’s disease. She always suggests the following:

Keep a journal. “This has been a very strange, spiritual journey and I'm so glad that I started keeping a journal when Bob began exhibiting signs of Alzheimer’s. I looked at it last night, and what struck me most is how far we have all come. It is sometimes hard to remember just how terrible those early stages were, and I’m glad I have kept this journal because it helps me track my growth.”

Be resilient. “Gather your resources and develop circles of support. You’ll be inspired by others who managed what has happened to their lives, and in time you will become an inspiration for others, as well.”

Keep love at the center of everything you do. “People with Alzheimer’s live in the moment. And what’s so amazing is that when you really observe that, you realize it’s a beautiful way to be.”

For more information:
• Learn more about Alzheimer’s disease and please contribute to this worthwhile cause on the official website: www.alz.org.
• Read Suzanne Carbone’s May 14, 2008 testimony to the U.S. Senate’s Special Committee on Aging here.
• View the entire hearing here.
Posted by Hope Katz Gibbs at 7:34 AM 2 comments: