The next president of the United States must put the full of weight of his office behind an energy plan, says Dr. Shirley Ann Jackson 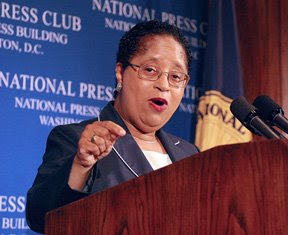 When energy expert Dr. Shirley Ann Jackson addressed the National Press Club on Tuesday, Sept. 9, the ballroom packed with politicians, energy industry professionals and journalists took note as she described the plan she and her colleagues insist that the 44th president of the United States consider when it comes to energy policy.

“The priorities and legacy of a new administration are often defined and judged by the actions that are taken within its first 100 days,” said Jackson, a MIT-trained physicist and current president of Rensselaer Polytechnic Institute, who is the vice chairman of the Competitiveness Council — a group of corporate CEOs, university presidents, and labor leaders committed to enhancing U.S. competitiveness in the global economy through the creation of high-value economic activity.

“The future economic competitiveness, national security, and prosperity of our nation will be determined by how we obtain and use energy, protect our environment, and address global climate change,” insisted Jackson, who was the chairman of the U.S. Nuclear Regulatory Commission; a theoretical physicist conducting basic research at the former AT&T Bell Laboratories; and a professor of theoretical physics at Rutgers University.

Talk about a truly amazing woman.

Jackson went on to explain that America is caught as never before in a double grip: the need for national and global energy security, and legitimate alarm over our planet’s climate change.

“Issues that ensue from these twin realities—complex geopolitical and geostrategic challenges, unprecedented wealth transfer from one group of nations to another, the profusion of investment choices before us—require vision, careful analysis, coherent thinking, and finally, action,” Jackson explained.

As co-chairwoman of the Council’s Energy Security, Innovation & Sustainability Initiative—whose members include Caterpiller Inc.’s CEO James Owens and the national president of the AFL-CIO, Michael Langford—Jackson said her organization has put forth six priorities for the 44th president’s first 100 days:

* Set the global bar for energy efficiency. The next president must issue an executive order mandating that the federal government use the procurement process to lead the market toward efficient energy standards for goods and services, as well as in the construction and retrofitting of facilities.

* Jumpstart energy infrastructure investments. As our government has set aside loans for American to afford homes and start small businesses, today our country requires a $200 billion national energy bank to provide debt financing and drive private investment in the development of sustainable energy solutions and supporting infrastructure.

* Spawn technological breakthroughs and entrepreneurship by increasing investment in research and development, and market commercialization to deliver secure and sustainable energy.

* Mobilize a world-class energy workforce. As computer scientists and aerospace engineers were crucial to winning the space race in the 1960s, we will win the clean energy race by educating the next generation of science and technology researchers and game-changing innovators, thereby filling the workforce pipeline with a new generation of skilled talent.

* Clear obstacles to a national transmission superhighway. As with the interstate highway system and the information superhighway, our leaders must knit together the patchwork of regulations and oversight into a seamlessly connected electrical power highway that is technologically capable of allowing both on and off ramps for all energy sources.

“Energy security is the greatest challenge and greatest opportunity of our time,” Jackson concluded. “A national call to action will ignite our collective imagination, spark a new era of innovation, stimulate our economy, open new markets, unleash our national potential, and enhance our economic and national security. But, we must begin. The next president must send a clear signal—in the first 100 days—that will move us from rhetoric to reality.”